We recently asked you, our fans, to share your moment of no regret – a moment where you just decided to go for it. Of the hundreds of video submissions we received, nine standout winners were ultimately selected by our Co-Founder, Mike.
The winners ran the gamut of a woman quitting her job later in life to start a pie company, to a couple with two small children who quit their corporate jobs and moved to a beach town to open an ice cream shop, to a young man who solo-traveled all over the world. Despite their stories being wildly different, the heart of each was the same: to live life with no regrets.
We brought those folks in to the taproom this weekend for our 20th anniversary celebration, but, before, that, they got to spend a day at the brewery. After lunch, tours, tastings and more, the night was capped off with a dinner at Hop Cat attended by Mike and Dave, where they shared some of their trials and tribulations of starting a brewery twenty years ago.
After dinner, the crew headed out on the town to some of the bars that were particularly influential when Founders was a tiny, burgeoning brewery – The Cottage Bar and Flanagan’s.
The trip finished with the 20th anniversary celebration at the taproom where the group partied the day away. Lorri, Joe, Corey, Darwin, Wes, Garry, Jennifer, William and Dewey – thanks for sharing your stories and inspiring us to continue sharing ours.
Cheers! 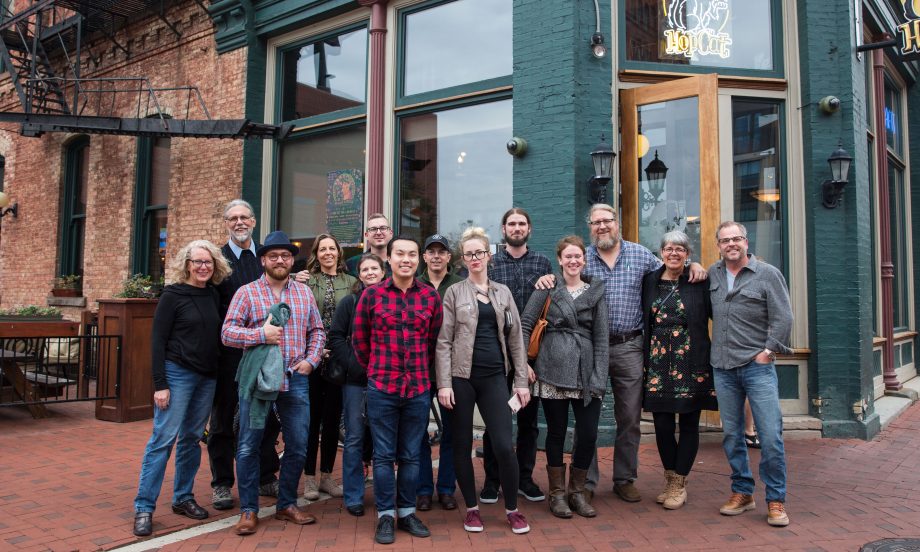 To mark this special day and kick-off its sesquicentennial year, the City of Mason is holding a sesquicentennial anniversary ceremony on Monday, March 9, 2015 at 6:00 p.m. at Mason City Hall. The ceremony will feature an honorary color guard with the Mason Fire Department and the 7th Michigan Voluntary Infantry, Company B (which is a non-profit dedicated to preserving the history of Michigan’s participation in the Civil War).

Several elected officials will also be present to honor and pay tribute to the city’s sesquicentennial including Congressman Mike Bishop and other state and local representatives.

Historical readings and live music from the Mason High School Chamber Choir and local artist Dewey Longuski (composer of the Mason 150 theme song) will be a part of the ceremony as well.

Trace Adkins selected Dewey Longuski’s ‘Headin’ Out to Tasty Town’ as the winner of the Waggin’ Train Tail Waggin’ Jingle Contest yesterday afternoon in Nashville. The competition asked contestants to submit a 60-second video describing how they have a “tail waggin’ good time” with their best buddies. Longuski’s video featured his pet Border Collie.

“The way he sang it sounded like one of those old singing cowboys,” Adkins tells Taste of Country. “I mean it was just perfect. It was perfect. He absolutely nailed it.”

Each of the five finalists performed their jingle live at the Hard Rock Cafe. Adkins was the competition’s only judge, but he said choosing the winner wasn’t difficult. The Mason, Mich. resident won him over from a musical and a marketing perspective.

All five finalists won a trip to Nashville to perform in front of Adkins and tickets to Wednesday night’s CMA Awards at the Bridgestone Arena. Longuski also got to perform his jingle in a recording session produced by Adkins and may have his jingle featured on Waggin’ Train’s official website and Facebook page.

There are many ways to be a winner, and Dewey Longuski has more than one reason to be called just that.

Late last year, Bareburger invited artists, musicians and creative folks to come up with a jingle for our restaurants. We received hundreds of submissions to our Bareburger Jingle Contest, and were amazed by the talent and creativity of our guests and fans. The entries ran the gamut —­ we received everything from full band treatments, to a cappella and acoustic ditties ­— and spent many hours listening to each and every one. In the end, our panel of judges settled on one winner, a jingle we felt was fun, creative, catchy and captured our message perfectly: “Bareburger tastes better, naturally.”  Mr. Longuski submitted the winning jingle.

As the grand prize winner, Mr. Longuski received $2,000 cash and a $1,000 Bareburger gift card. We are so pleased to announce that Mr. Longuski has generously donated the entire $1,000 gift card to the Foodbank for New York City, the city’s largest hunger-relief organization. The Bareburger family would like to thank Mr. Longuski for both his jingle, as well as for his very generous gift to help the Foodbank combat hunger in the five boroughs. Cheers to you, Mr. Longuski!

As Dewey Longuski was driving south on Hagadorn Rd. heading into Mason, he glanced at a sign just inside the city limits that recognizes the date of Mason’s incorporation as an official village. At that moment, he realized the next change of year would mark the town’s 150th anniversary and that, in turn, brought out the creativity and talents of Longuski to embark on honoring the town he calls home.

Longuski, a musician and songwriter who has recorded with artists as big as country music star Trace Adkins, wrote and made a song that celebrates Mason’s past and present. The track, called ‘Making Mason Memories,’ was declared the theme song for Mason’s Sesquicentennial celebration that starts in January and will last throughout the year.

“I feel very blessed and honored that ‘Making Mason Memories’ was dubbed as the official theme song,” Longuski said. “It is one of the highlights of my song-writing career.”

Longuski has lived in Mason since 1991 and is a research assistant at Michigan State University in the Department of Animal Science. He has won numerous music contests and runs a jingle-writing business – Dewey’s Ditties – out of his home. He has also been in an acoustic/bluegrass band called ‘The Red Cedar River Boys’ for seven years.

Making Mason Memories, however, is an independent song he made on the side. The lyrics start out with some history of Charles Noble exploring what is now Mason in 1836 to make a pitch for it to be the state capitol and the song, a country tune, also touches on Mason being incorporated as a village.

Longuski also uses the song to express some of the events and features that makes Mason a great place to live, such as the Ingham County Courthouse and the county fair that’s hosted in Mason every year. Longuski’s way of molding Mason’s past and present into a song is one reason why Marlon Brown, chairman of the Mason 150 Committee, decided it would be a good fit for the anniversary celebrations.

“We thought that his song uniquely captured the spirit of our community both lyrically and musically,” Brown said, also a Mason City Councilman. “We hope that it will be a memorable part of the sesquicentennial as well as a part of Mason’s story for years to come.”

An official theme song wasn’t even a part of the Mason 150 agenda, but when Longuski approached the 150 Committee with the concept and a rough demo of the song, they decided to give it a shot and were excited about the prospect.

After working with Longuski for a few months, everything was finalized and Brown introduced a resolution to the city council seeking to officially get it designated as the theme song. The resolution was approved by the council on July 21 and it is now on sale to the public.

Digital copies of the song are available online and Longuski agreed to give a portion of all sales to the Mason 150 Committee to help with expenses for the year-long celebration. The song is also a track on Longuski’s debut album.

Brown said that ‘Making Mason Memories’ will be played at some of the sesquicentennial events and will also have its lyrics printed in souvenir journals.

Not only did a glance at a sign create a special opportunity for Longuski and the 150 committee, Brown said they are hoping a music project could be made from it, as well.

“We discussed the idea of using this song as a springboard for a community music project where we could feature other local artists and ensemble on a recording of Mason-inspired music. My hope is to still pursue this project so that we can feature the wealth of talent in our community.”

To purchase a digital copy of ‘Making Mason Memories’ for $1, visit www.cdbaby.com/cd/deweylonguski. To buy a copy of Longuski’s debut album featuring the song and nine others for $12, send a request to dewey.longuski@gmail.com.